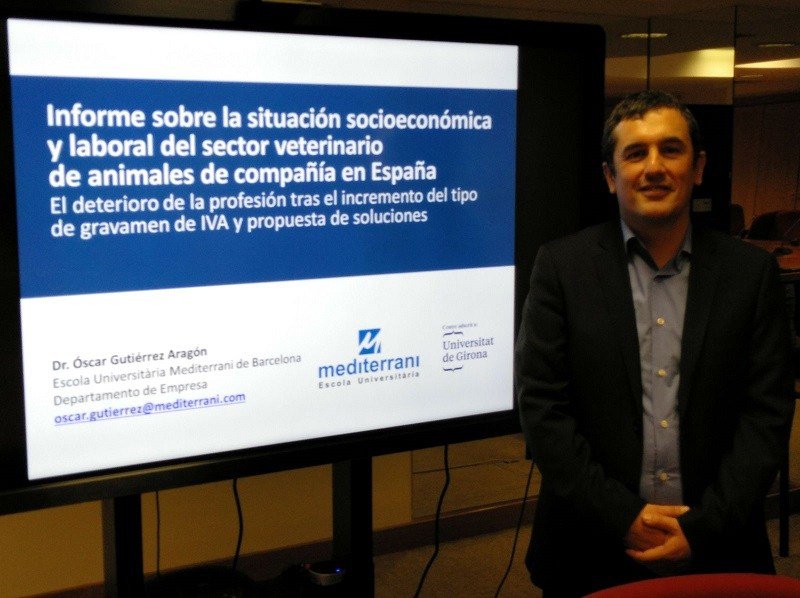 DR. ÓSCAR GUTIÉRREZ PROFESSOR OF EU MEDITERRANI AND AUTHOR OF A REPORT PRESENTED IN THE SPANISH PARLIAMENT CLAIMS A REDUCED VAT FOR THE VETERINARY SECTOR

The “Report on the socioeconomic and labor situation of the veterinary sector in Spain (year 2018)” prepared by Dr. Óscar Gutiérrez Aragón, Director of the Department of Business of the Escola Universitària Mediterrani, centre attached to UdG, commissioned by the Spanish Confederation of Veterinary Medicine (CEVE) , warns that, after the increase in the VAT rate for the provision of veterinary services produced in 2012, in addition to generating multiple health problems, there was a significant deterioration in a large number of economic, financial and labor indicators in the sector vet. From the fiscal year corresponding to 2015, coinciding with the improvement in macroeconomic figures in Spain, the sector has experienced a progressive recovery in a large number of its economic and financial indicators, proving an evident economic improvement today. However, there are a number of indicators related to the quality of employment and productivity per employee, which, despite the economic improvement, have been seriously damaged. The evolution of the indicators studied confirms that, in this sector, characterized by progressive feminization (phenomenon of unquestionable importance and with obvious positive consequences) and due to the circumstances described in the report, a large number of veterinary professionals (both women and men and, above all, the youngest) are suffering from a serious situation of job insecurity. . The conclusions of the report show that a return to the reduced rate of VAT levy for veterinary services should, among other measures, in addition to reducing some of the pernicious economic, labor and health effects suffered by the sector, serve to temper the situation of precariousness of many of the workers in the sector. This decision was already approved in parliamentary headquarters at the time, but, despite the broad parliamentary consensus existing in this regard, due to the current national political situation, with several months with the Government in office, it is suspended at the time of The publication of this report. Its effective application would allow, without any doubt, that a substantial part of the consumption or expenditure of the clients of the veterinary services currently employed in payment of the tax can be transferred to remuneration of labor or capital.